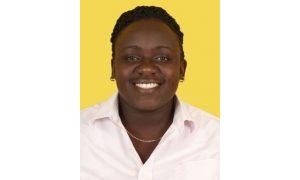 What an exciting meeting this will be as speaker Lucy shares a program that educates young women in Kenya. We are very extcited as we continue our work with Zawadisha and the Kellermann Foundation.Lucy Akoth Owoko, is a 36-year-old woman who grew up as the 10th child of the late Mr. Andrew Owoko and the late Mrs. Rosa Owoko with nine siblings (six sisters and three brothers). Her parents were able to provide her basic education and She did her undergraduate studies at the Kenyatta University based in Nairobi, Kenya where she attained a degree in Bachelor of Education to be a mathematics and economics teacher.

She is currently a secondary school teacher at Pumwani Girls Secondary School since the year 2010 where she has devoted 100% of her teaching career under the Teachers Service Commission of Kenya. Ms. Owoko has a remarkable teaching track record, and this is seen in the exceptional performance of students in the national examination Kenya certificate of Secondary Education final examination.Since her childhood, Ms. Owoko has always been passionate about sports to date and because of this she was appointed to be the head of the Games department in her school where she strives to nurture talent and establishes positive networking for her students.Ms. Owoko is an elected member of KUPPET (Kenya Union of Post Primary Education Teachers) as the Head of the Gender Department in Nairobi where she identifies, consults and mitigates gender related issues within her jurisdiction.Ms. Owoko goes out of her way to help her students in different aspects such as attaching them to mentors who help in guiding the girls in various career paths.

Lucy started by telling us little about he atmosphere at Pumwani Girls School when she arrived. The school is located in Majengo, a slum on the outskirts of Nairobi, Kenya. The students come from a backdrop of prostitution and drug abuse. Lucy had come from a very good academic school and this was a huge culture shock for her. The classes were very small, dropout rate and absenteeism was high, and no one wanted to come to school. Girls were hampered from coming by lack of funds, pregnancy, drug addiction and early marriage. Each day in her math class she would have a different mix of students, and only about half of them qualified to sit for the final exam at the end of the year. She noticed that the girls had low expectations, low self-esteem and were undisciplined. No girl from Pumwani had ever gone on to University.

Things began to change in 2014 when Lucy was appointed to be the head of the Games Department. She noticed a distinct change in the girls when they were out on the field and participating in athletics. They were competitive, engaged and happy. They participated in large numbers and even went to National competitions and beat some of the schools that had much better academic records. This gave Lucy the idea to use sports to motivate academic achievement. If they could win at sports, then they could win at academics. She began to use every opportunity to praise them in public and to their parents and families. She began to see a boost in self-esteem, demeanor and confidence.

The next step Lucy took was to involve the girls in a mentorship and job share program where they could learn from doctors, lawyers, accountants and bankers that there was life after high school and outside the slums. She began to take them on field trips to local universities so they could imagine themselves on campus. When she saw the need for support, she visited girls’ homes and encouraged families to support their girl’s education. All the while increasing her influence in the larger community to support education for girls.

The current atmosphere at Pumwani is very different from what it was. This year 10 girls received straight As on the final math exam and 16 received Bs. Thirty two girls received Bs on the final business exam. There is a competition for who will receive the first A. The dropout rate and absenteeism has dropped dramatically and the girls even request tutoring and developed their own weekly math contest. Now many students are accepted and attend the state funded university. Lucy has one former student who is attending medical school in the US, one who is a professional airline pilot, one who is a math teacher and another who is an accountant. Lucy says she has been blessed with the opportunity to teach and mentor and inspire these students.

In 2016 Lucy was given another honor by being appointed the Gender Secretary for the Kenya Union of Post Primary Education Teachers. She strives to make education free from gender-based violence and has begun a research project on the subject.During the pandemic, Lucy’s job has been more difficult as many of her students do not have electronic means of communication. For those girls she gets on a motorbike, taxi or bus to visit them in their homes. Her goal is “No girl left unattended” during this time. She wants them to know that they can count on her.

We asked Lucy what obstacles are keeping girls from attending school and her answer was “poverty”. Even with family support, schooling is expensive in Kenya. Parents must supply uniforms, money for lunch every day, textbooks, and school supplies. Theses costs can overwhelm many families, especially when it comes to educating girls. Although the club is planning on giving a donation,it was suggested that individuals may also want to contribute to the education of Lucy’s students. Donations may be made payable to Hellen Barclay and sent to PO Box 17633, South Lake Tahoe, CA 96151. She will make the necessary arrangements to get the funds to the students.

Thank you, Lucy, for a very inspiring presentation and for all the love and support you give to your students.

View Stories from this Season

View Stories from Past Seasons

Meet us on Thursday mornings 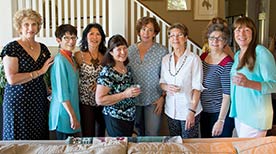 It’s a win/win fundraising opportunity for our efforts all year long! Great items you can order come right to your home and our club receives 40% to enhance the lives of women and youth! Check it out and spread the word!

Please make your next Amazon.com purchase through our AmazonSmile account and help to enhance the lives of women and youth at the same time. Click here to get connected now!

There's always a good read in the Best for Women magazine.
A global volunteer organization